Whew - I Finished Quilting It! 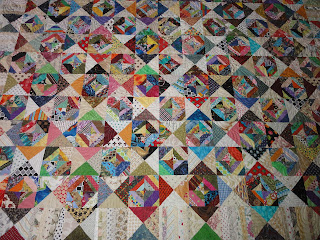 It was a bit of a challenge but I did get it done. 😃 Initially when I started quilting this little cutie I thought that quilting the first row was a bit difficult because of broken threads but I also realized I needed to learn a lot. One of the first things is staying in control of the machine so that I make deliberate movements and hopefully have less wobbles in the curves.  I also need to work on spacing so that it does look a bit more consistent within each motif. I'm not going for the look of a pantograph but I do want it to look more polished. lol  I guess the good thing is that I was consistently inconsistent so nothing is really standing out. The quilting really shows up so much better on the back. 😍

Once I started the second row I realized how easy the first row was in comparison - no kidding. With the first row it was fairly easy to find an escape route if I got trapped. Not so easy to do in the rest of the rows so I have lots of in-artful backtracking and quilting lines where I had to find a route to an open space.

I still had a lot of thread breaks and I did everything I could think of except change my thread spool. I rethreaded the machine, changed the needle, adjusted the tension, changed the bobbin, etc. but I still had a lot of difficulty. It could be that the thread was a problem but I didn't have another cone of the same colour and I didn't want to switch colours mid quilt. I got through it mostly but when I got to the very last row I guess I was tired by then and I just made a lot more mistakes with my quilting because I was just done and I wanted it to be finished. There is a lesson there too and that it is better to call it a day than to push through when I am really tired. 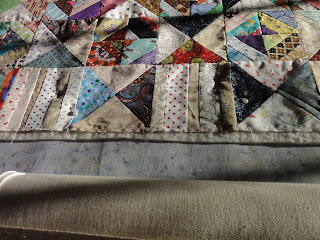 I used a franken batting for this quilt. It has 3 separate long but narrow pieces of batting pieced together and when I got to the bottom of the quilt it really was exactly enough. 😅

It's not a big quilt - 59" x 75" and was quilted with light blue thread and blue magnaglide in the bobbin. I used Hobbs 80/20 for the batting. It is all trimmed and ready for me to make and attach the binding. 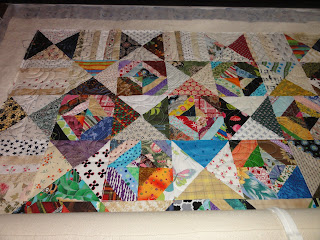 I loaded this quilt up the other day and I knew I wanted to try a freehand edge-to-edge design on it. This is so out of my comfort zone but I really do want to become a confident quilter. I know I've said that before but I really do need to put in some learning and practice time. I don't need to be a superstar but I do want to be capable. lol

I did have another rough start but it was not something that I couldn't overcome. I did have to pick out the first bit and I started again but then it was downhill from there. For some reason I kept having thread breaks. I didn't even get a full pass done across the quilt and I think my top thread broke at least 4 times. I finally gave up, turned off the machine and decided it was just not my day.

From what I did get done you can certainly tell that I am still very much a beginner but I'm okay. I know if I manage to keep at it I will improve. 😁

I didn't get back to it right away because my quilty sister Cheryl and I took a little road trip and I bought a few things for my long arm. I really like using the prefilled magnaglide classic bobbins so I got a box of those in light tan. I seem to use that colour the most. I also bought some batting among other things.

Yesterday, after I posted about my crooked courthouse flimsy I was going to start quilting this little cutie again but when I went to rethread the machine I found the thread was actually wrapped around the interior working parts of the take up lever. After a bit of delicate surgery I successfully removed the threads and the patient survived! 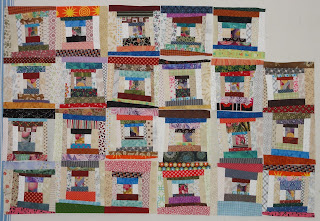 I showed these blocks that were in progress way back when and since then they have turned into a flimsy. I don't know how or when that happened because I just don't seem to keep good records unless I am blogging. 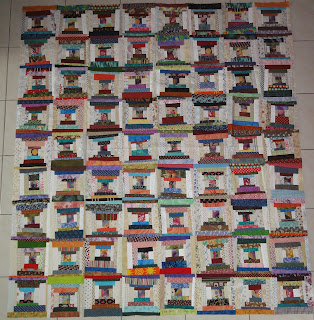 Anyway, this is the stage it is currently at and I thought it was finished but I might have changed my mind. I had pulled it out of the "to be quilted" stack to show a friend and when I started looking at it I felt that it needed a border or something added to it.
The flimsy is currently 66 x 76 so it could easily be made bigger to change the size from a couch quilt to maybe fit a double bed. I love it!

Another One Bites the Dust 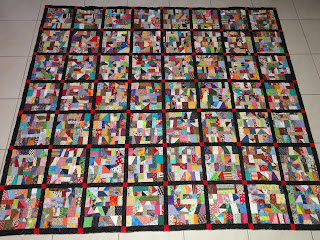 I've named this quilt Another One Bites the Dust because when I took it off the frame after quilting I immediately texted my quilty sister Cheryl with a photo stating another one bites the dust. I seem to be on a roll with actually getting some quilts to the ready-to-bind stage. After such a dry spell this just seems so amazing to me. 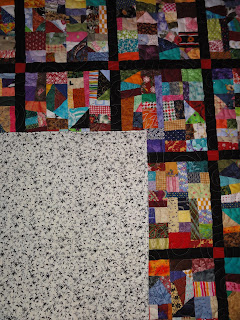 When I was looking back at the history of this flimsy I realized that I had intended to call it Abstract but that was so long ago that I forgot all about that name. I already made the label with the new name so Another One Bites the Dust is going to stick. The binding for this quilt is ready and waiting so all I need to do is attach it to the front by machine and then add the whole kit and kaboodle to the newly started pile of quilts waiting for me to finish with hand stitching.

I attribute the fact that I am getting these flimsies quilted with moving my quilting frame out of the basement and back into the living room where my frame had been set up prior to my Mom coming here to live. Our basement is fine and quite live-able but there is not a lot of daylight and I need daylight. I am so not a basement person and I give kudos to anyone that is able to spend lots of time hanging out in the basement or living in a basement apartment.

Anyway the good news is that it seems that I am long arm quilting again. 😃 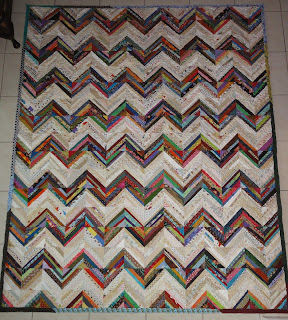 I love string blocks and crumb blocks and I especially love quilts that are made from these types of blocks. This quilt is no exception. I had started making the string blocks for this quilt forever ago and I did get them put together into a flimsy but then it stayed unfinished for the longest time.

I recently got the flimsy loaded onto my longarm and I chose a nice pantograph called Whipped Cream  and I started quilting it. I got the first row done and I was feeling so good because I was actually quilting 😃 but then I rolled the quilt forward to start the next row and it did not align. Oh no....I was so upset because I had finally started feeling like quilting and was feeling so joyful and relieved and then a big boo boo happened - right out of the gate! Apparently, when my machine was moved somehow the laser light was loosened and I didn't realize it. So as I moved along the pantograph the laser light was shifting all the way across the quilt as I made my first pass. You can be sure that I will always check to make sure the laser light is secure from now on. It was a hard lesson. 😢

I removed everything from the frame and I ended up having to rip out the whole row. The row was 72" across by 11" deep and it was fairly dense quilting. I was so discouraged....

I did get through it even though it took me a long time to rip it all out and then I made myself reload everything. I am glad I didn't just give up because now that I've got the quilting finished I love it even more. I have the binding already attached to the front of the quilt and I just need to hand stitch it to the back.

Despite the rough start I am hoping that actually quilting some flimsies will be the gateway to creating quilts again. Seeing the magic that quilting brings to a quilt top can be inspiring and I hope it transfers to the sewing machine.

The above photo is a picture of my design wall. Sadly, my design wall has looked like this for more than a year now - nothing new added or removed. The good news is that I think I am starting to feel the stirrings of creativity returning and I am hoping that means some new quilt tops will start appearing. Honestly, it is about time!!! I can't tell you how many times I have walked into my sewing room with great hope that a spark of creativity will be ignited but nothing would happen no matter how hard I willed it. It has been a very long dry spell for sure.