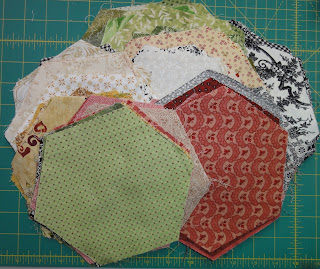 Quite some time ago my quilty sister Cheryl gave me a stack of large hexies that she had cut for a quilt but she couldn't make it work for her. They have been taking up table space and I've been constantly moving them around and out of the way. Well, last night I took a little detour from the string bins and tried to figure out what to do with them. My sister and I texted back and forth and talked on the phone about what to use for the connector triangles. In my minds eye, which is not reliable at all, I thought I could use the larger triangle that makes up part of a triangle in a square block. 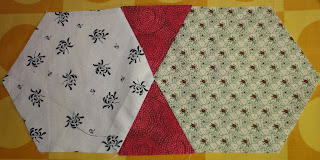 I did a test and it absolutely did not work! It was difficult to sew and it bubbled up in the center where the triangles met. I realized then that it needed to be an equilateral triangle. Luckily for me I just happened to have the perfect ruler to use to cut those triangles. 😊 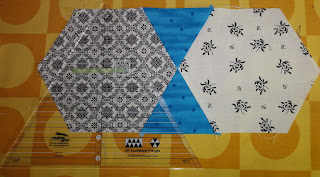 This is the second test block and it looks so much better. It was easier to sew together as well but I will have to pin where the triangles meet in the center. I am so not a pinner!

I have to decide which fabric or fabrics that I will use for the connector triangles but other than that I am good to go. I think this version will be a donation quilt because as I was working on the test blocks I got an idea using different fabrics for the hexies.

Posted by Ellen at 10:59 AM
Email ThisBlogThis!Share to TwitterShare to FacebookShare to Pinterest
Labels: hexagons

I have a love/hate relationship with figuring out things. But once I’ve got it watch out! Can’t wait to see your progress!

Well, that blue looks good with those fabrics. Looks like she gave you quite a pile of those hexies. It'll be fun to see where they take you. ;^)