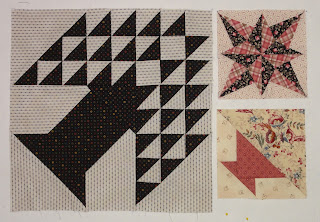 I am still plugging away at making the blocks for this quilt and I think I am 'only' three months behind but I will eventually get there.

I couldn't find a large enough piece of scrap in my bins for the tree block so I ended up cutting into full fat quarters for the piecing. It would have been just fine to make the block totally scrappy but I didn't want to mess around with it.

Great job, Ellen. Love that star and the fussy cut of the flower in the basket. Very well done! ;^)