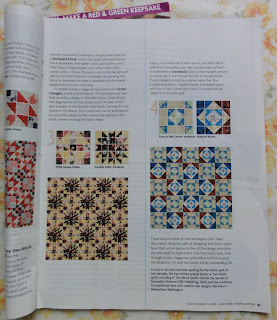 My youngest son had plans to come home for a week for Thanksgiving the second week in October so that meant that I needed to clear out my other sewing/storage room - errrr - spare bedroom. lol

While I was digging around and sorting things I found some older quilting magazines and I took a break and thumbed through a couple.

In a 2008 Quilters Newsletter there was an article about using two block designs to create secondary designs and I really liked one of the examples in particular. In the third example the two blocks they showcased were called Wild Goose Chase and Double Aster Variation.

The timing wasn't right to start the quilt but that didn't stop me from having a look through my fabric stash.and pulling some fabric options. I am sure there will be more additions and some exclusions before I make a final decision but I think I am on the right track. :)

Thank you to everyone that left such kind comments and sent emails about the loss of my brother. I really do appreciate them.

Posted by Ellen at 10:42 AM
Email ThisBlogThis!Share to TwitterShare to FacebookShare to Pinterest
Labels: controlled scrappy, two block designs