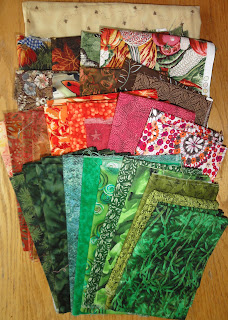 The other day my sister Glenda brought me a bunch of fabric with the hopes of having it turned into a quilt that she wants to give to a friend.

Glenda wants the quilt to look earthy so she brought mostly green, brown, and pinkish/reddish/orange coloured fabrics. Most of these are fabrics that she has collected over time and added them to her stash. The funny thing is she has never made a quilt and at this point is not likely to. She doesn't even really sew very much at all but she does know how to collect fabric. :) 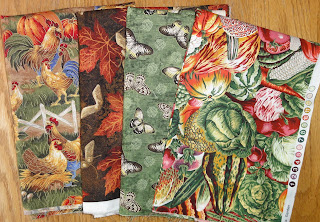 She did make a point of specifically buying these four fabrics and would like them to be a bit of a feature in the quilt. 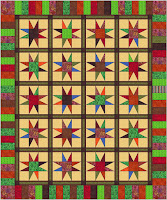 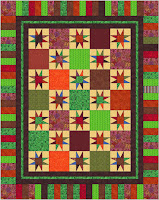 I made a couple fairly simple designs in EQ7 yesterday and sent them to her so she could choose which one she would like. Of course, these are not designed using her fabrics but I thought they would be somewhat representative.

Posted by Ellen at 9:59 AM
Email ThisBlogThis!Share to TwitterShare to FacebookShare to Pinterest
Labels: donation quilt

It's always hard to make for an order. You never quite know if it's what they really want.

Very interesting fabrics. Good luck with that order. I love both designs. ;^)