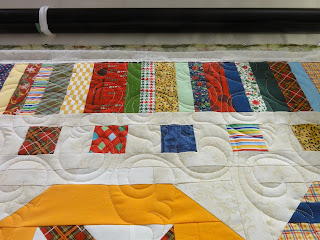 By the time I got all of the borders attached to this quilt top I was tuckered out! It took me much longer than I thought it would. I didn't get much sleep on Sunday night and I sure paid for it on Monday as I was dragging myself around trying to finish up those borders.

As soon as I finished attaching the final border I did a line of stay stitching all around the outer edge of the quilt top because I didn't want to have any split seams. I didn't think that I had handled the edges too much but they were already showing signs of opening. Not a problem now!

Once I got the borders finished I took a break from sewing. :) I felt much better later in the evening and I pieced my backing and loaded it on the frame. I was originally going to use the same wide backing that I did for my ugly Christmas sweater quilt but I changed my mind at the last minute. The fabric that I did choose was actually purchased last year for my quilt but it wasn't working for me at the time. Funny how things work out! I forgot to take a photo of it before loading it on the frame, oh well, I will show it later. 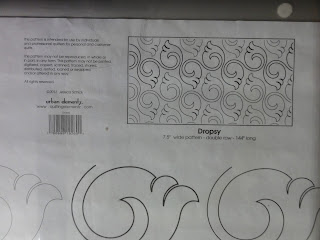 My quilty sister Cheryl suggested I use a pantograph that has music notes because my son is a pretty good musician and that would tie in with Christmas music and carols. Doesn't everyone wear their ugly Christmas sweaters while participating in Christmas carol sing-alongs? ;) I agreed that it was a great idea except when I pulled out the one I have I realized that it is quite primitive and doesn't have any registration marks and it doesn't nest together. So I vetoed it and chose a panto called Dropsy instead. On paper the design makes me think of French horns. :)

Those do look like french horns! I'm sure it will look lovely on the ugly sweater quilt.