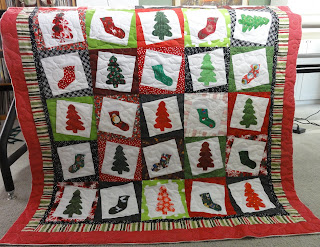 Ardis asked me to quilt this little quilt for her last week and she needed it for Christmas. It really was short notice but I said sure....she had broken her wrist and wasn't able to do it herself.

It is a cute little quilt but it did give me some trouble. Well, not the quilt specifically but the backing that Ardis gave me to use. She had purchased a fleece blanket and it was really cute but it was smaller than advertised! I had loaded it on the frame yesterday and I thought I would just double check the measurements and it was not as wide as the quilt top. It should have been at least 3" bigger! So, I let Ardis know right away and she brought me a larger fleece backing to replace it.

I quilted it this morning and got it trimmed and it is awaiting pickup. Ardis just wanted simple loops and white thread. I used Cansew in the top and magnaglide in white in the bobbin. The batting is 100% cotton.

When Ardis delivered the second backing to me I had the quilt top hanging like it is in the photo and she noticed an oopsie. See the tree block in the upper right - it is turned on its side. She decided to just leave it as is. I think it looks like it got chopped down in anticipation of Christmas. lol
Posted by Ellen at 2:15 PM
Email ThisBlogThis!Share to TwitterShare to FacebookShare to Pinterest
Labels: customer quilts

I didn't even notice that until you pointed it out! It adds character!

Cute quilt. I thought exactly like you, that the tree was cut down to bring it home. Well, it does make the quilt even more interesting. You sure are on a roll. Will you still energy come Christmas? ;^)

I think Ardis quilt is quite a lovely Christmas quilt.