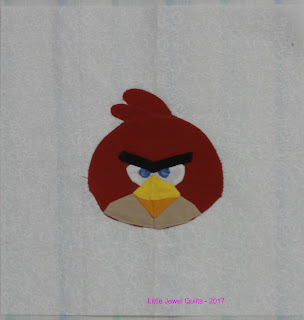 I did finally get my Angry Bird block done but it wasn't finished until long after it was due. When I did the applique I found that one of his eyes was way too small compared to the other and I just ran out of time to fix it. So, I returned the Pizza Box to the Guild with a photo of the Angry Bird block and a promissory note.

I found this cute block at Fandom in Stitches and even though it was originally designed as a paper pieced pattern I had no trouble adapting it to applique. I hand appliqued all of the pieces to the red background and after fusing the face to the background fabric, I did a zig zag with invisible thread around the outer edge to securely attach it. The feature fabric that I had to use was the blue and it worked perfectly for his eyes.

I did get my Angry Bird block finished in time for this month's meeting and I handed it in along with my May block. 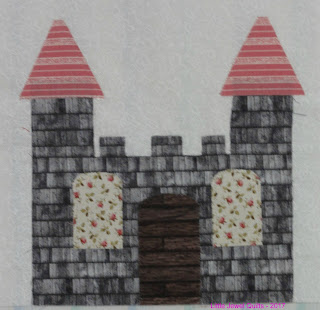 The May block's theme was 'My Home' and I made a castle! The feature fabric that was mandatory to use in this block was the little floral print that I used as the windows in my castle. It was quite a simple and quick block to make because it used fairly big pieces. :)  I fused the windows and door to the castle and then fused the castle and the tops of the turrets to the background fabric. I then did a zig zag stitch using invisible thread around all of the pieces to securely attach them to the background fabric.

I can't say that I have ever used invisible thread before and here I used it twice in one month! :)

Love your blocks, especially the castle. You used the perfect fabric for this one. Love it! ;^)