Another One to Work On

Now that I have my Blue Cheese and Ugly Christmas Sweater quilt tops put together and ready for quilting, I have picked up another in-progress quilt to work on while I think about the layout for my Westering Women quilt.

I thought that I had blogged about this quilt before but maybe not. I don't have a name for this quilt yet but I keep thinking something like Starflower (which I am leaning to) or Sunflower or something to that nature. I designed and started working on this quilt last September. I had cut out most of the pieces in anticipation of working on it while I was away on quilt retreat at Killbear Provincial Park.

Since the retreat, I have worked on making the blocks off and on but mostly off since then. ;)  I did take it to my Guild's social sew day in February and all I got done was this messy pile. 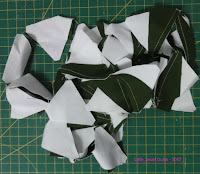 Considering the social sew was a full day that is not a lot of progress. I am always too busy socializing instead of sewing! With that pile all tidied up I can see that they are unfinished 'triangle in a square blocks'. 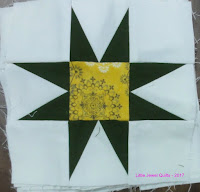 For the past couple days I have been making the shoofly blocks and now I need to turn my attention to the star blocks. I think I have eight made already and I don't think it will take me too long to finish the rest. After that, this quilt should come together fairly quickly because it has a very simple layout with plain borders. Nothing fancy or complicated here!

Posted by Ellen at 10:44 AM
Email ThisBlogThis!Share to TwitterShare to FacebookShare to Pinterest
Labels: green gold quilt, Starflower

It might be "nothing fancy or complicated" but it is still a fabulous quilt. Enjoy! ;^)

That is going to be SEW beautiful!!!

This will be beautiful. It makes me think of summer daisies. It looks so complex, I was surprised to see that it is just two classic units!

This design is stunning!
Your quilt is going to be gorgeous.

Your quilt reminds me of a field of daisies!