Over the past two days I have been digging into my repro scrap bins and I have actually been making some blocks. I already had the first two done - Independence Square and Indiana Territory and I added four more. 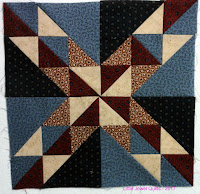 In the photo you can see that they are mostly large blocks just about 12.5 inches unfinished except for one lonely little block. That is the first block in the series and I 'accidentally' made it 9 inches. I know...how could that have happened??? When I took the photo I noticed something else about those blocks stuck up on my design wall. Block number 6 named 'Hill and Hollow' has a wee issue and I don't just mean that my pinwheel in the center is a bit off. I tried three times to fix the center and that is my limit! No, it's that darn patch in the upper right corner section. That is going to need a bit of surgery to fix!

No problem, out came my trusty seam ripper and after a bit of this and a bit of that and then re-ripping and resewing because I made the same mistake....voila! 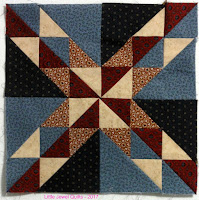 Oh that is much better. Today I plan to carry on with my journey...

Posted by Ellen at 9:46 AM
Email ThisBlogThis!Share to TwitterShare to FacebookShare to Pinterest
Labels: Westering Women

Great job so far, Ellen. Love your choice of fabrics. You're half way there. I keep reminding myself "it'll be worth it", so I hang on. Good luck. ;^)

Really love these blocks, it is sure going to be one quilt that is a keeper. Your too funny and a lot like me, sewing the same mistake in again once after it was ripped out.

I know exactly how that goes!