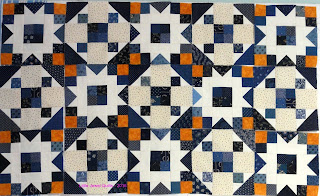 I actually started this quilt in September when I went away on my first quilt retreat. I had a blast while on retreat but it was a lot of work to get all of my stuff ready to take with me. :) This is one of two quilts that I started while I was away.

I had seen a photo of this quilt in a Quilt Sampler Shop Hop magazine where they were featuring a Canadian shop called Quilt Junction. They had named this quilt 'Better with Cheddar' and I was immediately attracted to it and decided that it would be one of the projects that came on retreat with me. The magazine came to me as a hand-me-down and wouldn't you know it....one of the most crucial pages was missing. Happily, I was able to figure out the fabric quantities and strip sizes, etc, that I needed to make the blocks. I cut most of the strips, squares and triangles before I left so I didn't have to do a lot of cutting while on retreat and I spent lots of time just pushing fabric through the machine. So relaxing!

You would think that with all of that sewing I would have stacks of finished blocks but I focused my sewing on making lots of assembly line sub-units instead of focusing on finishing each individual block. I just need to start putting the pieces together to build some more blocks!

Beautiful! Sounds like you have all the hard work done. The blocks will go together quickly with all that prep work done.

Lovely design. I love your blocks so far. It will all come together pretty fast now that all the little elements are assembled. Enjoy! ;^)

This looks great!! I love the colours and design!!

This is going to be a beautiful quilt!
Just love your color choices and block & quilt design

I saw this hanging at Quilt Junction... it's a lovely quilt!