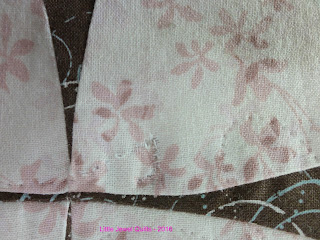 Honestly....I have been having a run of bad luck. First off, I got sick with a terrible cold and I think this is the worst cold I have ever had! Knocked me on my butt and I ended up missing two days of work because I just didn't have any energy and the cold symptoms were just plain old....ugh.

I am recovering and I was feeling not too bad earlier today so I thought I would work on my Winding Ways quilt. It has been sitting on the frame for the past few days waiting for me to get going with it. I had already quilted the first row and even though it looked great it was a real bear to quilt because of all of the seams that intersect and overlap. After getting through the first row I thought that maybe I had all of my quilt troubles behind me. Let's just say I was too optimistic because I have had not one but two needle breaks today. The first one caused only very slight damage but the second one has damaged the front and the back of the quilt. I feel sick about it :(.

The second broken needle did not cause a large hole but it did really fray and shred the fabric and it just will not hold up over time if I leave it. I will have to figure out a way to applique over it with the same or similar fabric and then try to match up the quilting lines later. 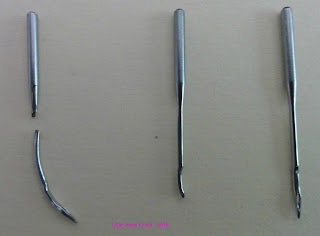 I took a photo of the broken needles as well as an intact needle as a comparison. I don't know if you can tell in the photo but I was able to recover both pieces of the needle on the first break but for the second one I am missing the pointy end. I have searched the quilt top, the floor, the machine and the bobbin area but I am at a loss as to where it went.

I think that there is still just about three more 12" rows to quilt and I have changed my needle again and I have everything ready to go. I just hope I don't face any more issues with quilting this quilt.

Oh what a pain. It is so disappointing when this happens. I'm sure you will be able to cover it up after it's off the frame

Horrors! Good luck with the last of those rows! Can't wait to see!

Happy to hear you are beginning to feel a bit better!
How awful to hear about your needle troubles with your quilt.
I hope the next go round of quilting is much smoother.