Okay...this block was such a huge struggle for me. I actually made it twice...the first try I gave up as I was adding the final row. I tried paper piecing the first version but I couldn't get anything to align. I loved the colours and fabrics that I originally chose but I was working from scraps and I just didn't have enough left for the second try. (: 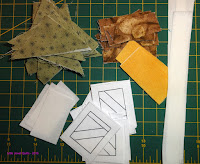 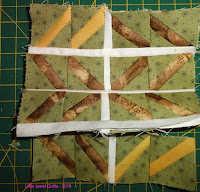 My second attempt wasn't much better than my first and it is a bit bigger than it should be but I am keeping it...for now. I racked my brain trying to think of a way to make the little blocks that make up the whole. I thought if I made them in a strip and cut them on an angle that it should work. After I got it all together I realized that I had cut one strip of the brown fabric the wrong width and nothing would align to it. C'est la vie!

In older quilts you can sometimes see where the quilt maker had difficulty with piecing or appliqueing a block and they just did their best and moved on. Certainly a lesson for me to allow myself to do my best and not worry too much about perfection. I was so confident that I could make it much better on my second try but this block has certainly humbled me! :)

Posted by Ellen at 10:11 AM
Email ThisBlogThis!Share to TwitterShare to FacebookShare to Pinterest
Labels: Midget Blocks

That one was a killer! I think I did it twice too and it still was not right. Best to call it done and move on. So many small blocks in a big quilt... it will hide nicely in there =)

Sometimes it's the simplest looking blocks that give us the most trouble.
I give you an A+ for strategy and effort! And I'm sure it will look great in the finished quilt!

Hang in there. When I was making my Nearly Insane quilt some blocks just wouldn't work. 1 6" block took 8 hours and another had 227 pieces. It didn't line up. I left it never to be done again. I was getting too frustrated and put it done to the stage where I was at that time... Stop stressing...... It is a journey