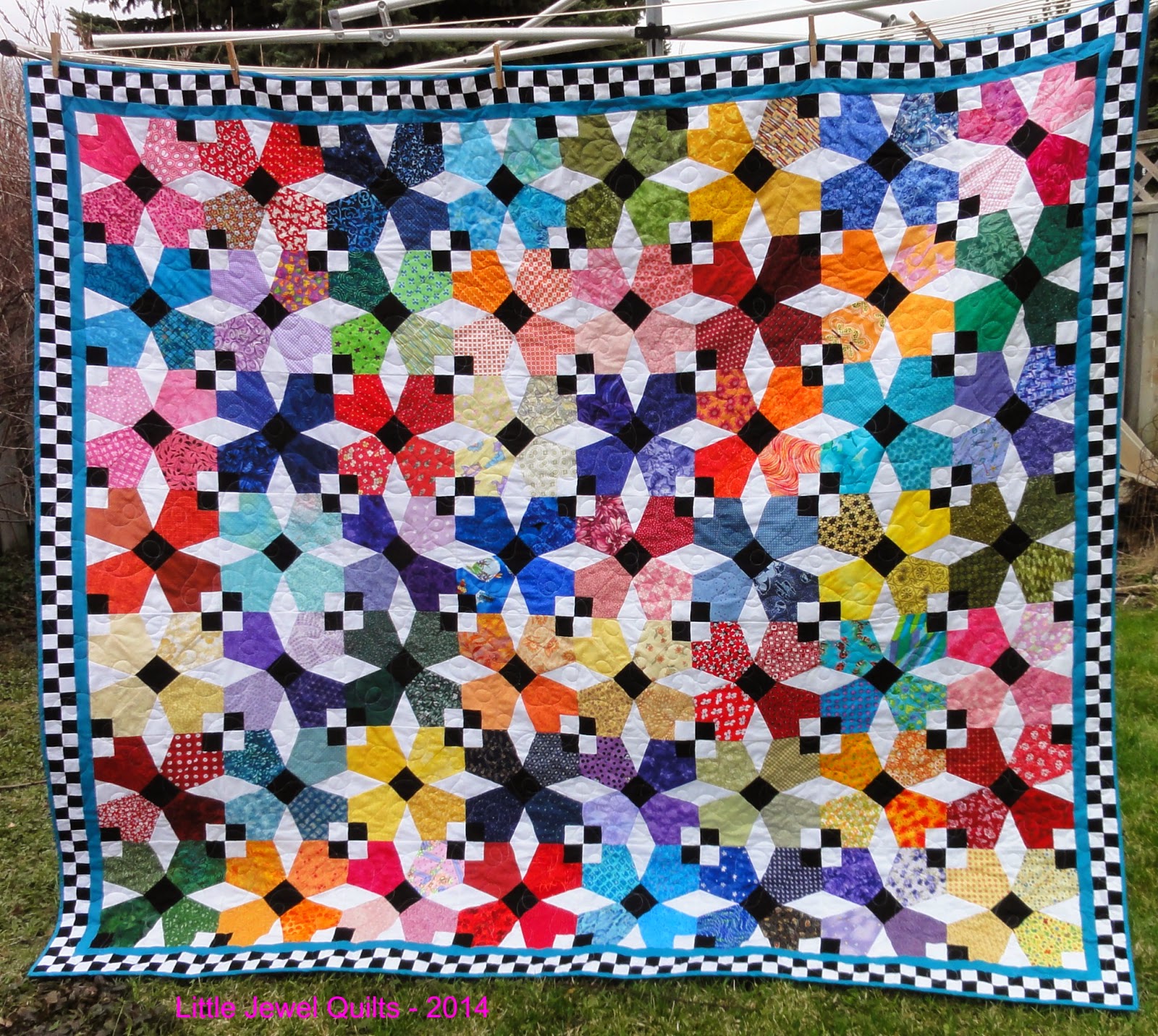 I finished putting the last stitch into the binding just a few minutes ago and once I tucked in all of the thread ends from quilting I ran outside with it to take some photos on my clothesline. I had to turn it sideways and even then it was dragging on the ground - that is not really an indication that it is a really huge quilt though. It just means that I am really short and need my clothesline closer to the ground so that I can reach it to hang my laundry. ;)

The quilt finished at approx. 69" x 79" and I quilted it with white thread in a free hand loopy-loop design. I had agonized over how to do the border and tried several designs that just didn't sing to me. I am happy with the checkerboard but now that I see it finished I think that it could potentially have had more than one border added. Oh well...too late now but no sad face here.....I love it!

I had designed and pieced this quilt while participating in the Rainbow Scrap Challenge that is hosted by Angela of soscrappy. Pop on over and check out the latest links here.
Posted by Ellen at 4:31 PM 21 comments:
Email ThisBlogThis!Share to TwitterShare to FacebookShare to Pinterest
Labels: Boys Britches, Rainbow Scrap Challenge 2014 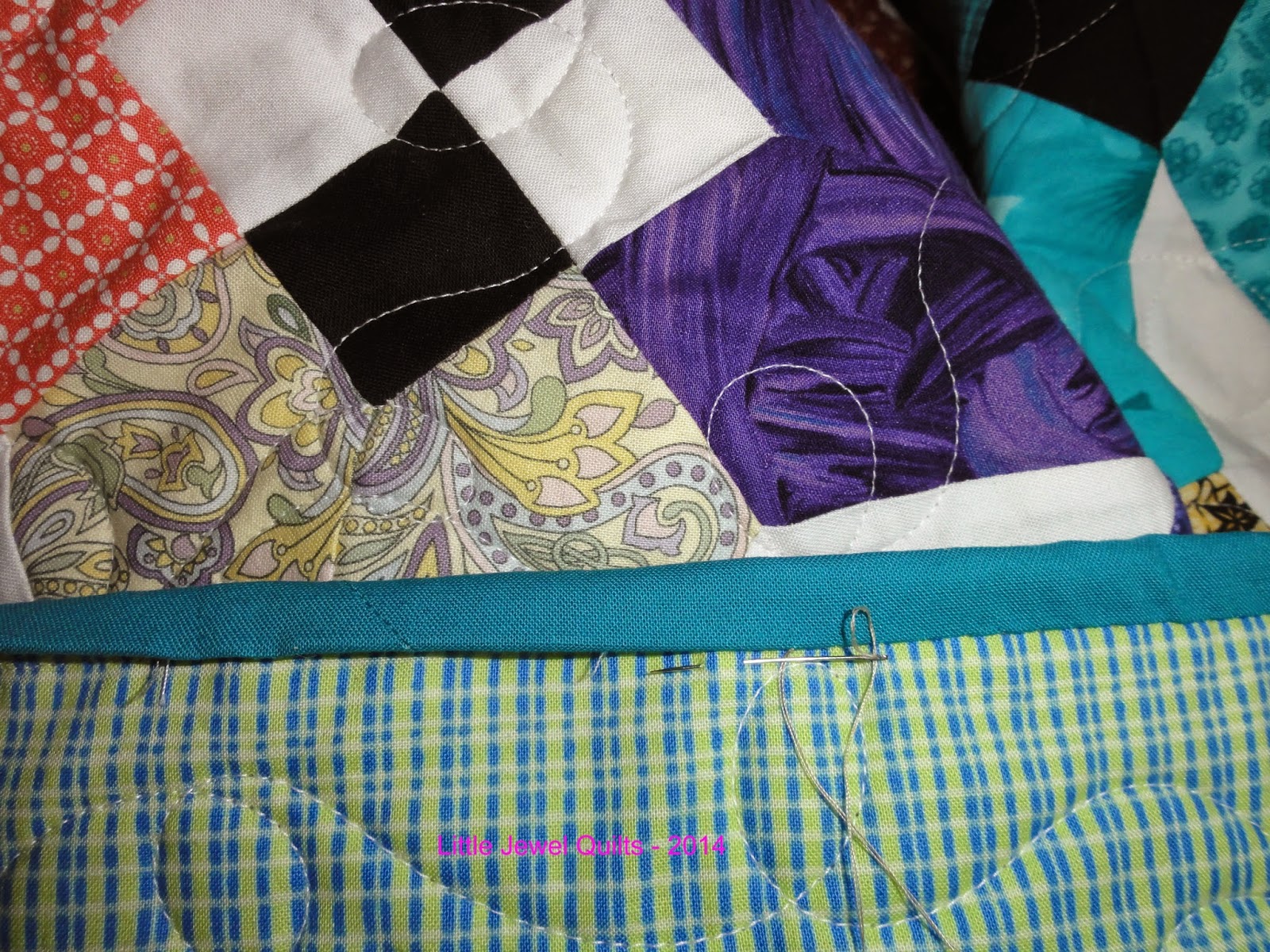 I finished the quilting on this quilt at the end of January and since then it has been hanging around waiting for me to trim it and make the binding. My sewing room is really quite full and whenever I want to work on something I have to move a million things around to make space. I got a little tired of moving this quilt from space to space and decided it was time to trim it and get the binding made and attached.

I have started the process of hand stitching it to the back and I am really looking forward to seeing how it will all look when it is finished. I plan on working on it some time today and I plan to finish it over the next couple days. I have read on different blogs about how you hold your quilt when sewing the binding to the back. I always have the quilt sitting in my lap with the binding folded over and down - it just looks and feels a little awkward to do it any other way. Do you have a preference?

Before I can spend too much time with it today I need to take care of a few things. The groomer (my friend's daughter) will be coming mid day to give Molly and Peanut their Spring hair cuts so I need to get them bathed and dried before she gets here. I also need to make a run to the post office to mail my Block Lotto blocks. I am very late sending them but...well...it is what it is!
Posted by Ellen at 9:05 AM 9 comments:
Email ThisBlogThis!Share to TwitterShare to FacebookShare to Pinterest
Labels: Boys Britches 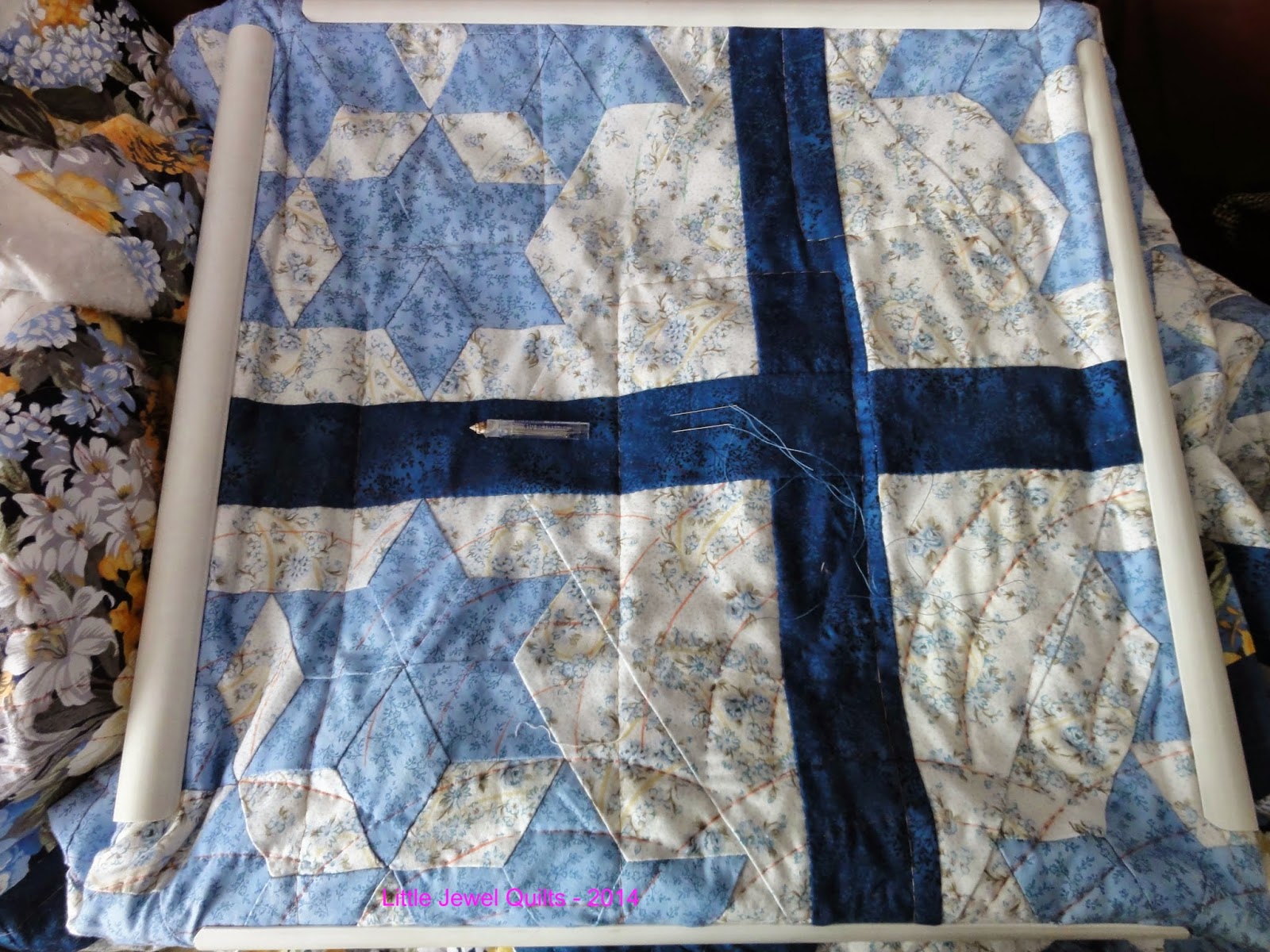 This morning I woke up bright and early, or should I say, dark and early because it really is still very dark at 4 am! When I came down to the family room I saw my blue Seven Sisters quilt laying in the corner of the room all neglected and lonely. I felt a few pangs of guilt because I had promised this quilt that I would quilt her and get her finished really quickly but you know how it goes...enough said. 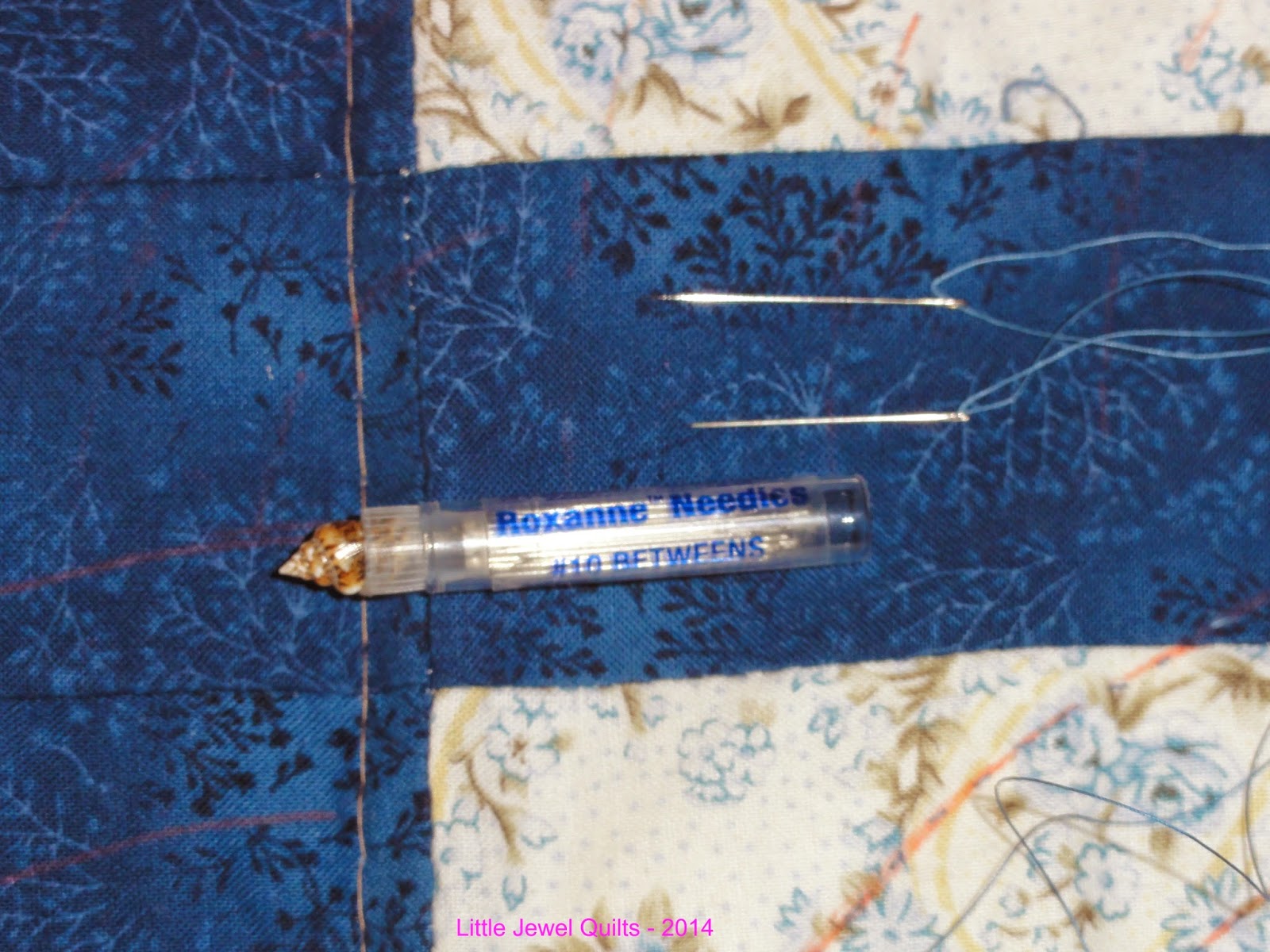 I had purchased some new hand quilting needles and I wanted to try them out and this seemed the perfect opportunity. I have been using a #9 between because it felt more sturdy than a #10. I always found that when I used the #10 it seemed that I would have it bent before I finished even just a few stitches. Maybe it was the brand because these Roxanne #10 betweens seem to be quite sturdy and even though I have nearly quilted a complete Baptist Fan this morning it hasn't bent yet.

Look at the difference in size between my usual #9 and the new #10 - it is taking a bit of time to become accustomed to the smaller size but it isn't too bad. I probably should have put something in the photo to show the scale but they are quite small in comparison. The container itself is quite small and it holds 50 needles. I cannot imagine using a smaller needle - ever!

I am also trying a different quilting hoop. I have had this square plastic hoop for many years but haven't really given it much of a tryout. It had belonged to my SIL and when she passed it was given to me and I just stashed it away. It is something else that will take time to become accustomed to but I do think that it makes it easier to access more of the stitching area.
Posted by Ellen at 11:31 AM 10 comments:
Email ThisBlogThis!Share to TwitterShare to FacebookShare to Pinterest
Labels: blue seven sisters, hand quilting 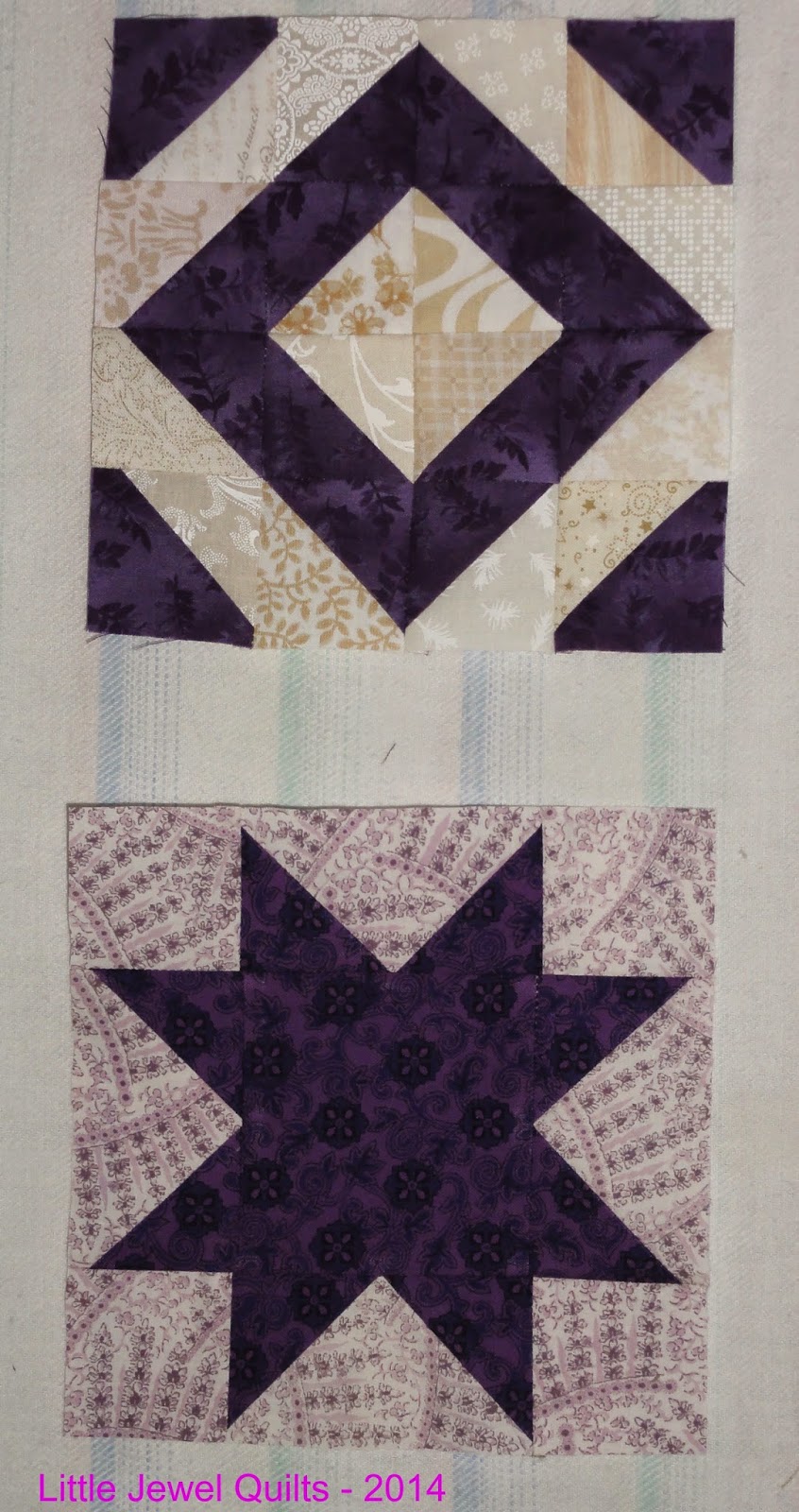 Wow...it has been a while since I have made any blocks for the challenge and I thought what better way to get back into the swing of things than to make some of the Sampler blocks that Angela has been posting.

These two blocks are Depression and Saw Tooth Star and I think they both turned out pretty good. I used precut triangles from my scrap stash for the Depression block and I used a 3.5" strip and 2" strips from my bins for the star block. The background fabric that I used for the star originally came from my SIL Wanda's stash and she passed away in 1998. I love it when I use bits and pieces of her fabrics in my quilts.

A new quilt and a new Guild! I have joined another guild -The Moraine Quilt Guild - and so far my experience there has been fantastic. The first meeting I attended was yesterday and I had such a good time - everyone was so friendly and welcoming. They have a sit and sew that you can attend for a few hours before the meeting starts and I took good advantage of that time and started working on a new quilt.


This quilt has very humble beginnings....I had started making twosies from green and neutral 2" scrappy squares as part of the Rainbow Scrap Challenge last year. I got some made at that time and I continued with them yesterday. By the end of my sewing day yesterday, I had quite a few 4 patches assembled.

Today, I added 3.5" scrappy squares to the mix and then started sewing everything together.

I had some trouble deciding on my background fabric...I didn't want to do scrappy so I had to choose fabrics from my stash that I had at least 3.75 yds. available. I made a few samples and then I chose one of them. I really want to use only stash for this quilt and I think I have made a pretty good choice. I still need to sew some more green/neutral 4 patches because as it stands I don't have quite enough for a full sized quilt and I will continue with that over the next few days. I am really happy with the way things are going so far with this quilt.