Those of you that read my blog on a regular basis know that I am working on a memory quilt for a little boy named Zackie who passed away when he was only three years old. His Daddy has commissioned me to make this quilt for a surprise Christmas gift for his wife, Zackie's Mommy. One of the special requests that I received was to have Zackie's name added to the front of the quilt. I thought it would be a great idea so I had the letters custom cut from his Elmo blanket and I planned to machine applique them to the background.

I have never machine appliqued before but I thought I would give it a try. I had some extra letters cut from scrap fabric to practice on. It was an absolute failure...I was disappointed... but how could I legitimately think that I could learn how in one afternoon. The addition of his name was a special request so I decided to stitch it on by hand instead. It did take quite a bit of time but I think the results are so worth it. 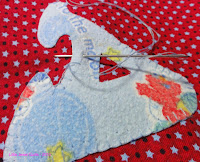 I did a raw edge applique using a blanket stitch. The whole point of this quilt is to use fabric from Zackie's clothing and to make them the star of the quilt so I decided to use a thread that blended in with the letters instead of using a contrasting thread. 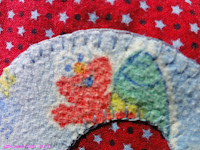 I didn't necessarily want the stitching to be the focus feature although it does look pretty darn good. I think it is a wonderful touch to have the stitching done by hand and while I worked on it I thought about Zackie and his family. I don't know them personally but I do have children (all grown up) and I think the love you have for your child is one of the most powerful and universal emotions.

Flannel is a difficult fabric to machine applique. Did you use a stablizer? That would be my only suggestion. But, your handwork is beautiful! I'm sure the mother will be very touched and this quilt will be a treasure.

How sad for the family to lose their little boy but what a wonderful idea to have this memory quilt created for the mama.

It looks wonderful! Your post reminds me of the bible verse" As you sow, so shall ye reap. Sounds like you are getting as much out of making this quilt as it will bring to the family as a memory of their son. That is why quilting is often more than just cutting up fabric and sewing it together again, so much more, especially for the quilter.

You did a fabulous job of hand stitching the applique letters. I am sure Zackie is looking down from heaven and feeling quite happy to be having a quilt made in his honour. Love the red fabric with little blue stars. Love sis

What a very special quilt. You are doing a beautiful job with this memory quilt.

The handwork is a beautiful touch. I know lots of people do beautiful work by machine, but yours means so much more.

Hand-stitching the letters was the right answer--it looks beautiful.

Your hand work is wonderful--very special.

The hand stitching is perfect... love this idea!
Thanks for linking up!

Good morning, this is a very special day!!!!

I viewed the incredible masterpiece in progress and it looks AMAZING! My wife will be so surprised, overcome with emotion and will absolutely admire this incredible piece of art.

Thanks Ellen! I can't wait to see the final product! It's fantastic.