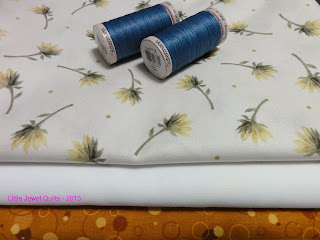 Yesterday was an interesting day and it started out quite well. Cheryl and I worked on preparing some of the backings for my flimsy's in waiting and also made some fabric choices for other projects. We also went shopping and bought some fabric and some hand quilting thread.

Our chef decided enough was enough so we made dinner for everyone and we decided to make Paneer Butter Masala (we loosely used this recipe and made some adjustments like using coconut milk and other substitutions). It is a very mild and delicious curry and we served it with basmati rice and curried potatoes with peas. We even had some lemon pudding...errr....pie. 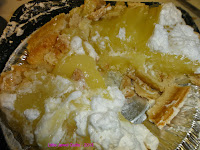 My husband had purchased a pie and on the way home he had to slam on the brakes to avoid hitting another vehicle that cut him off. It really was quite funny when my son Adam stated that he had a dollop of pie instead of a slice - hee hee. Even with the pie disaster, dinner turned out quite well despite the train wreck we had with this...... 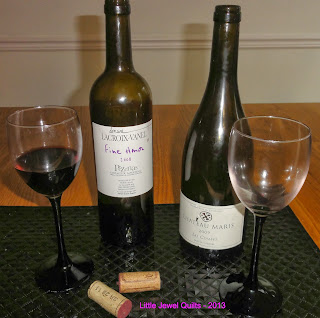 Once the wine was opened the retreat was definitely over. This morning I will be driving my sister home to Toronto. We had such a fun time!

Posted by Ellen at 9:24 AM
Email ThisBlogThis!Share to TwitterShare to FacebookShare to Pinterest
Labels: miscellaneous

Hello Ellen,
life is so wonderful. You and your sister are working on such beautiful things.
Enjoy all your sewing days
Roswitha

Good thing the sewing stopped before the wine was consumed! Glad you had a great retreat with your sister. Love that blue thread and can't wait to see what it will be used for.

So much fun and great memories!