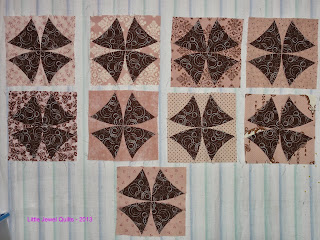 I did really well with my winding ways blocks yesterday and I got nine pink blocks completed. I made one block for each pink fabric that is being used for this quilt. The next batch will probably be brown blocks just to keep everything even...ha ha!

I didn't do so well with cutting my scraps. I thought I would get a lot done while watching Bonnie Hunter's quilt cam but by then I was feeling quite tired. I decided that I would just sit and knit some dishcloths but I didn't get too far with that either. I shut everything down at about 9:30 and was in bed by 9:45 - I was having way too much trouble focusing on anything!

I woke up feeling pretty refreshed and I have made two loaves of bread and a big batch of homemade powder laundry soap. I feel pretty good about that! Next on my list to tackle are some pears that are starting to show their age. We have a pear tree and it is a really good producer. I often can some of the pears but because of the basement reno I can't get at all of the things I need so we have just refrigerated them. I need to do something with them so I plan to try a new recipe for a pear cake and a pear crumble.
Posted by Ellen at 12:48 PM
Email ThisBlogThis!Share to TwitterShare to FacebookShare to Pinterest
Labels: miscellaneous, winding ways blocks

Glad you got some productive sewing time in. Your blocks look great. The pear crumble sounds great.

Your blocks are looking so good! Can't wait to see this one come together. I make a pear cake every fall, kind of a tradition around here.:)

make pear jam with your pears!! On toast, it is almost like you are eating pears and toast!! And I am liking your blks..... and really good for you going to bed when you did. Now you are ready to just make it all happen now, you will be making blks till the sun goes down again once you get started!!