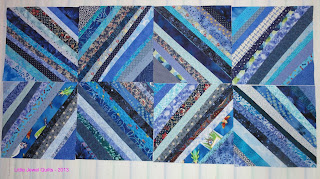 Today I worked on making eight more blue string blocks for my nephew Mark's quilt. I don't really have a plan yet other than it might have blue and green string blocks of some kind in it. The colour for the Rainbow Scrap Challenge this month is light blue and I don't really have much to work with. I hope no one minds but because I do have a lot of blue scraps of every shade that I will work on using more of those up this month instead. These new eight blocks will be added to these 25 that I had made previously. I am linking up with other challenge participants at soscrappy's. Hop on over and check out the other links. 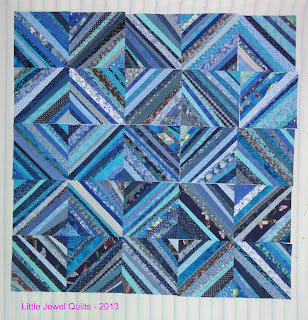 I had planned on doing some sewing yesterday but I didn't get home from Toronto until around 9 pm and I was beat. As I was driving home I just kept thinking about how the younger group were really just getting ready to go out for the evening while I was thinking about just getting home and being in bed by 10 pm! 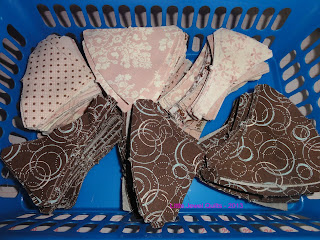 Even though I didn't get my planned sewing done I still did spend some quilty time with fabric and I did not come home empty handed. My sister Cheryl and I tag teamed and got these winding ways pieces cut just before I had to leave. I have enough pieces in this basket to make 90 blocks. It doesn't look like much does it?
Posted by Ellen at 5:01 PM
Email ThisBlogThis!Share to TwitterShare to FacebookShare to Pinterest
Labels: kim's quilt, Rainbow Scrap Challenge 2013

Your blue string blocks look great! I will probably do the same as you and include other shades of blue along with the pale ones.

I'm looking forward to saying, "I used all my light blue scraps!"

I too will probably be adding some other shades in this month too - heck I may quilt that blue/cream log cabin this month. That would count, right?
Great string blocks.

Your blue scraps are so wonderful together.

I love those blue string blocks too! Way to go in using up your scraps. Love sis