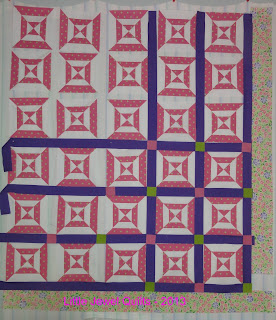 I really wanted this quilt to have sashings but no matter what I tried this quilt just did not want to cooperate. 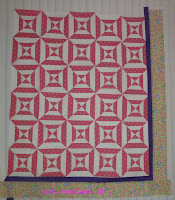 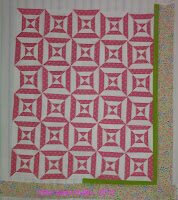 So I gave in and looked at some options for the border instead. I really don't want to do anything complicated at all because I think the blocks really do hold their own in this quilt. That may be why it just does not want sashings...period. I think it is going to be so cute when it is done. I do really like the way the blocks look side-by-side and I think a baby would like to look at them too. 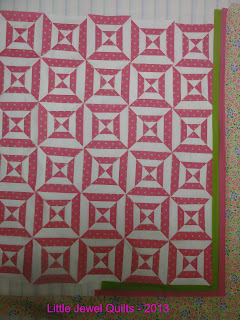 I think I have finally settled on this border arrangement of a green and then a pink strip. I think even just a small border of the purple is way too distracting. I want the quilt to be bigger so later today I will be cutting and sewing more strips for the blocks. If we don't have the predicted thunder storm and if I have time, I will try to sew them together as well.

I drove my son to Toronto this morning and while there I planned to spend some time visiting. I was at my sister Cheryl's place when my husband called to say that they were expecting another major storm and that I should think about coming home earlier rather than later. So I didn't stay at her place long and then popped in to my Mom's to see her for a few minutes.

My family did fairly well during the flooding the other day - my Mom just had some minor seepage into her basement and my nephew Kevin ended up with 6" of water in his apartment. He would have been fine but because of the power outages the sump pump for his apartment building was out of commission. Toronto just had an overwhelming amount of rain fall in such a short period of time and there was some major flooding. When I was there on Friday there was also a major rainstorm - I think this summer has been unbelievable with the amount of rainfall we have received in the Greater Toronto Area.
Posted by Ellen at 4:10 PM
Email ThisBlogThis!Share to TwitterShare to FacebookShare to Pinterest
Labels: Tickled Pink, Tina's Baby Quilt

The blocks in your quilt have a lot of movement when placed side by side, probably the reason why it's resisting the sashing.:) Great border idea!