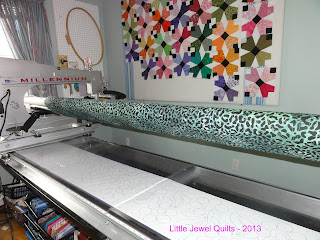 So this is the debut of my 'new to me' long arm. It is on a 12' table and takes up a huge portion of my sewing room. I have had to rearrange a lot of stuff and move things around and out of my sewing room to make space. I had it for just about 2 weeks before I got up my courage to actually use it. I am thrilled with my purchase and I think even though it was an investment of cash that it is an investment in me! I plan on using it for many, many years to come and to quilt many, many quilts for family, friends, charity and just plain old quilts for me too.

A couple weeks ago, my sister Cheryl spent two nights at my place and we loaded up some old sheets with batting in between to do a practice run and I found it quite challenging to quilt with it at first. Once I did the practice run we loaded one of her quilts on the machine and I did my very first pantograph on it. It was really difficult to follow the lines but I did eventually get better with it as I worked on it.

I did have a major problem though and I am quite embarrassed to admit it, but I got a cleaning rag caught in the hook. I was mortified, horrified, terrified and lots of other 'fieds when it happened. I couldn't get the pieces of the rag out!!!! I really just wanted to cry because I thought I had really broken it and that it was done....over....kaput. After reading about how to proceed and also calling APQS my husband removed the hook and soaked it in WD40 to remove the small  pieces of the rag that were caught in it. Once he got it all cleaned out he oiled it and then reinstalled it, timed it and told me not to do that again!  We also needed to change a small fuse that blew. The support team at APQS were so helpful and were quick to respond and they even tried to make me feel better and told me that it happens more often than you would think. They also assured me that there really isn't too much that I could do to to this machine that would destroy it. I think just about all of the parts are replaceable which is a good thing but hopefully I won't ever need to replace anything. 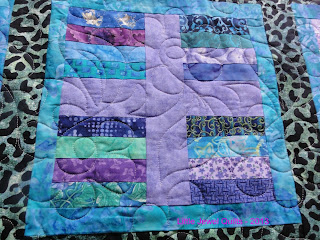 After all of that adventure, this is how my sister's quilt turned out - not too bad - I think I did a pretty good job with it! 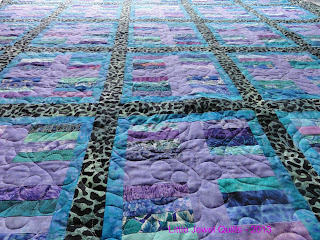 Posted by Ellen at 8:12 AM
Email ThisBlogThis!Share to TwitterShare to FacebookShare to Pinterest
Labels: long arm, Millennium

WOW! So exciting! I fought with my new machine for most of a day before I realized I hadn't threaded it correctly. And I tried to sew through a ruler once and thought I had killed it. You will be amazed at how much easier it gets though, and how fast you get better. I started with a big meander, then a small meander, the a loop and a double loop. There are so many variations on simple themes to get you started. Don't forget YouTube so many inspirational videos to enjoy. Most of all ENJOY

What a wonderful new addition to your sewing room, and a great adventure in quilting. I love my mid-arm, and wouldn't turn back!

Congratulations!! I love my machine, most of the time. And you aren't alone with the rag thing. I've done it too, with the same resulting panic.And you are right about APQS support. They are fabulous.

Congratulations on your milli! I have a millennium as well and had interesting mishaps along the way as well. It gets easier and you get more confident and yes the APQS service team is wonderful. Nice job on your first quilt, lovely pantograph.

Beautiful job! It will get easier each time you quilt one. I am so excited for you... I know you were thinking of this purchase for awhile - enjoy it.

I know what you mean about working up the courage to get started. Good for you that you did!
So exciting! The first quilt looks fantastic!
Yah Ellen!

Ellen, yes it happens! You'vegot to run over the ruler now for shock number two! The great thing about our APQS machines is that they're very robust and fixing things can be done by our hubbies!

I have only a mid-arm setup but I can totally relate: the fear of actually starting, doing something that DH has to fix. I laughed out loud when I read that he "told me not to do that again!" Husbands! So funny! Congratulations on both!

Love your APQS. Thanks for the beautiful quilting you did on Deanna's quilt. We will see you again this weekend for more fun and adventures on your APQS. Love sis