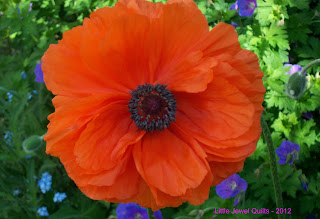 I have not felt like sewing for the past while but I hope to get back to it soon. September was very challenging for me with my husband being so sick (thankfully recovering)  but October has been even worse. My best friend, Louise passed away on October 28. I am so heartbroken...I cannot express how much I loved her and how I will miss her. She truly was such a good person, so eager to help anyone if they were in need. She was so generous of her spirit, her time and her love.  Louise provided so much advice, care and support when my husband faced a very serious health issue 6 years ago and she helped me find him a fabulous surgeon (for that I will be forever grateful) - by then she knew the system very well.

Lou-Lou and I met in September 1994 in our local park where we had both stopped to let our children play after school. We had just moved to this town and didn't know anyone. Louise and I struck up a conversation and discovered that we lived on the same street but on opposite ends. At the time we met she was still recovering from very intensive and extended treatment for inflammatory breast cancer. She was only in her mid thirties when she was diagnosed - I had know idea someone so young could get breast cancer and I had never even heard of inflammatory breast cancer. We quickly became very good friends and happily our husbands became good friends as well. Over the years, Louise was challenged by 2 recurrences and she fought the last one for the past several years. Early in October she and her family were given the devastating news that there was nothing more that could be medically done for her. We were all in shock. It is strange but her mother passed away just a few days later without knowing how sick Louise was. Does a mother just know somehow?

I am very honoured that Louise called me friend.
Posted by Ellen at 1:07 PM
Email ThisBlogThis!Share to TwitterShare to FacebookShare to Pinterest
Labels: Louise

My heart is with you.Your dear friend is no longer in pain.
You will keep your wonderful memories of her, with you for ever.
Hope your husband continues to gain his strength .
Love and hugs Laura.xx

So sorry to hear of your troubles and loss - keep the faith, prayers are with you...
~Deb

I read this with tears in my eyes. You were both blessed to have met each other that day and have created many memories of the years you spent together. It is not easy, let yourself grieve. And spend the next little while letting yourself remember her. And yes, sometimes I do think, a mother just knows.