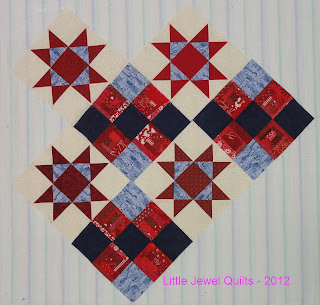 Yesterday I did manage to get a little bit done on these quilt blocks. Certainly not as much as I had hoped but I keep telling myself at least I did something. I hope to cut some of the dark blue border triangles tonight so I can see how it will look once I add more of the dark blue fabric and I need to get at making the crumb blocks because this is all I have available.

The reason I didn't make much progress on the quilt blocks is this.

I thought I was finished in the kitchen when my husband brought in the tomatoes and beans - yikes - more to do. I didn't touch the beans but I did start working on the tomatoes. Amy from Amy's Passions had put a call out for tomato recipes and Amanda from Amanda's Musings offered up the recipe for Nigella Lawson's  Moon Blush Tomatoes. It sounded so good and easy to me so I thought I would try it out. I changed things up a bit by adding other seasonings but basically I followed the recipe.
Everything was fine but my oven did cool after only a few hours so I reheated to 425 F and once it reached the temperature again, I turned it off and turned on the oven light. When I got up this morning at 5 am everything looked and smelled great and the oven had retained the heat. I thought I would get going on the next step before I went to work so I put the tomatoes in the blender to chop them up into a sauce and that was when I realized my mistake and it was a huge one. I used aluminum baking sheets for the tomatoes! I know that you are not supposed to use aluminum with acids but I just wasn't thinking. I ended up throwing it all away because it was all contaminated! I guess one good side affect of my mistake is that the baking sheets look a lot cleaner...grrr. 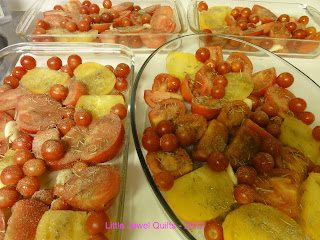 I still had lots of tomatoes left so tonight after supper I tried again. My husband searched high and low in the basement (it is under renovation so it is really difficult to find anything you are looking for) and he did manage to find my glass bake ware. I checked the actual recipe on-line and it looks like she used cherry tomatoes but I included a variety of tomatoes in mine. I also included smashed garlic and bay leaves (I will remove the leaves before chopping in the blender). Tomorrow after work I will look after the beans and do another batch of the tomatoes. My kitchen smells so good!

For now though, my sewing room is beckoning and I just want to get in there and sew!!
Posted by Ellen at 9:16 PM
Email ThisBlogThis!Share to TwitterShare to FacebookShare to Pinterest
Labels: cooking, garden, Shoot for the Stars, Stars and Nines

They look so yummy! so sorry you had to toss a batch.... but at least the pans are shiny now! Love the quilt progress so far.

Your blocks are looking great and it is interesting to see that your tomatoes benefited from your blogland friends.