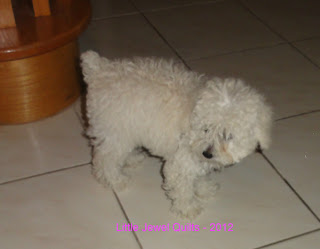 I have been a little preoccupied the past couple days because of this! 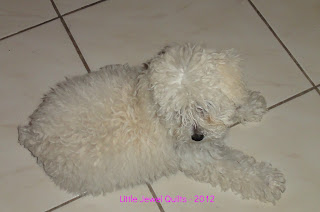 She is sweet and cuddly and very feisty and saucy! I think she is going to be a bit of a challenge to train, but I know that she is a smart little girl and hopefully she will be obedient. She was a little nervous of Molly at first but now she is running up to her and taking toys right out of her mouth. Molly wants to know what happened - she's been such a good little girl and now we have forced this little Peanut on her. Molly is still trying to figure things out!

Peanut is 11 wks old and is mostly poodle - her dad was a white purebred 4 lb poodle and her mom is a 9 lb black 'mostly poodle' with a bit of schnauzer and I think shih tzu. My sister Christine owned Nino, the father, but sadly he has died, and my sister Glenda owns Pepper - the mother. They had 5 puppies and all the puppies have stayed within the family. Molly is my 16 lb mini schnauzer and she is just over 1-1/2 yrs old - still a puppy herself. She is way bigger than 3 lb Peanut and doesn't know her own strength. They do seem to be getting along, mostly okay, but I wouldn't dare leave them in a room alone together - just in case.

I can't believe it but Peanut has not had one accident on the floor yet...and she has been here a couple days. We do go outside quite often and, of course, it has been raining fairly steadily for the past 2 days - just figures. Peanut even went to the patio door herself at one point and when I took her out she did her business. I like to think that she was telling me she needed to go. Can it be as easy as that? It certainly wasn't when I was training Molly. 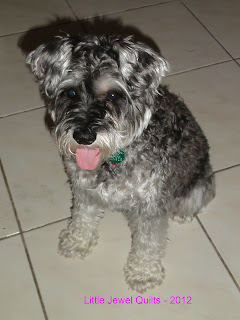 I am hoping that Molly and Peanut will become good friends. I have been feeling really bad lately about the amount of hours I have been working which is way more than I thought I would be. Molly does need some company while I am at work - I know that she really does miss me. 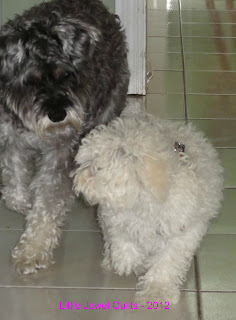 I don't work today, so I am hoping to get into my sewing room to work on some projects today and tonight. I have plenty to choose from but I am sort of itching to start a new one! I hope I can control myself but the urge can be very difficult to overcome.
Posted by Ellen at 2:11 PM
Email ThisBlogThis!Share to TwitterShare to FacebookShare to Pinterest
Labels: Molly, Peanut

Way too cute! Sounds like she is a good girl too with no accidents.

Adorable puppies to keep you company! Hope you don't have a bad case of 'startitis' coming on!!

Starting new things is soo much fun! Hard to resist for me too. Peanut is adorable, and so is Molly. :) I think some dogs just catch on sooner than others for the house-training, so fingers crossed that Peanut is one of those dogs. :) Sounds like she's well on her way. Have a great weekend!
xo

ADORABLE! I could just eat that "peanut" right up. I am sure they will become the best of pals.
Cath @ Bits 'n Bobs

Sounds like peanut has you well trained to house breaking, ha ha. Have fun with the puppies.

Love your little Peanut & Molly! I think they will just love each other and become good friends! Love sis

They are both too cute! give them both a scratch and a pat from me!