I shouldn't really complain because it has been so dry but my back yard is turning into a bog and that does not help when I am training a little fluffy, white puppy! I need to get out there and pick more beans but it is just too wet in the garden. I didn't do any garden work so that means I got to have some play time - I think I will be forgiven that I didn't do any chores around the house yet. There are a few things that I will have to take care of today but I am in no rush.

I have made three more blocks for the Rainbow Scrap Challenge but that is just about all that I have done with my scraps from my 2.5" bin. That leaves me with 8 blocks from the aqua/teal family - this batch is a bit lighter than the ones I made last week. 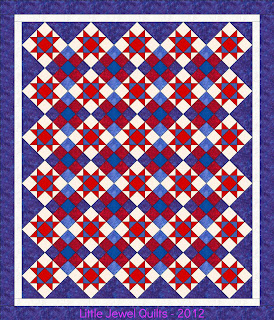 A while ago, I had made a couple quilt designs in EQ7 and I have been working on one of them today. I had started making some red crumb blocks a week or two ago and I thought I would use them as the center square for the stars on this quilt but after trying a block I have decided that I will use them for the 9 patches instead. 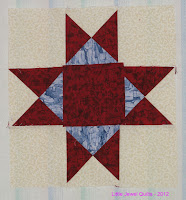 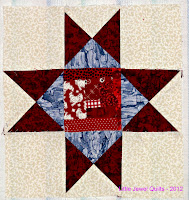 I made 4 blocks but I don't know how much it looks like the mock-up from EQ7. I think once I make a few more blocks I will have a better idea of how it will look. As I have said before, I really cannot envision how something will look until I actually make it. I had been going back and forth about using a solid red for all of the red patches except the crumb blocks, so that is still an option. The 9-patches do look dark in the photos but maybe that will work out okay in the end. I think this quilt will be going to one of my nephews so it probably would be better to be on the darker side. I don't know, maybe it is the dark blue that is putting me off because it does not tie in with anything until the border is added. I think another thing that I am having trouble with is that these 3.5" block components are big relative to the pieces that I normally use and they look...well...big to me.

If I had stayed with my original plan I was only going to need 30 crumb blocks but now I need 80 and I have not made nearly enough yet. I will pick away at them over the next little while whenever I have the urge to make a big mess! 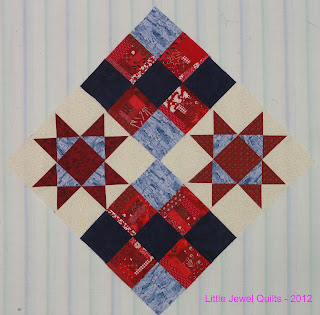 Posted by Ellen at 6:01 PM
Email ThisBlogThis!Share to TwitterShare to FacebookShare to Pinterest
Labels: Rainbow Scrap Challenge 2012, Shoot for the Stars, Stars and Nines

Nice aqua/teal blocks! And I LOVE the RWB design.
I could be tempted to making that up....if I didn't have so many other projects I want to push through before the end of summer :)

Love the rainbow scrap blocks, and your pattern/stars with the crumb blocks! :) Finally getting some time to blog surf again.. I have missed it. So fun to see everyone's photos and see what they've been up to. Thanks for sharing, Ellen. :)

Your aqua/teal four patches are looking good and I like how the red white and blue is coming together.

The teal 9 patches look great. LOVE the design and it is looking great so far.

I really love the way your RWB quilt is coming together! It is going to be a beauty! Love sis