Earthtones is Back in the Line-Up 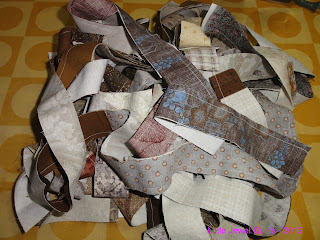 I thought that I might give this quilt to family friends for Christmas last year but that was not possible so it has languished for a while waiting for me to pick it up again. Well it's time has come! I need to make quite a few 2 patches to be able to finish piecing the blocks, so last night I started cutting more 1/2 inch strips from brown, tan and rust fabrics as well as some neutrals. I had some small pieces of 1/2 inch neutral strips left over from the log cabin quilt top I just finished sewing together so I tried to use up some of those too. This pile of strip sets measures 720" and that isn't quite enough so I sewed more together after I took this picture. The strip sets are all pressed now and I plan to start cutting them tonight. I hope I get them all done so that I can just start sewing them into 4 patches tomorrow but I think that may be a little too optimistic. 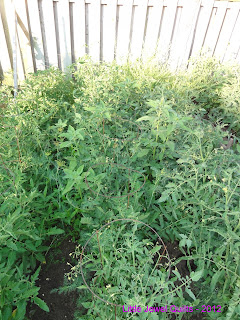 Even though my vacation has started, I still got up early so that I could work in the garden before it got too hot. I had two cups of tea and then headed out by 6:45 this morning. I took a picture of the garden bed that I was working on after I had already started weeding it. This bed has three rows of tomato plants and it should have some space between them. Before I started weeding the rows were absolutely filled with weeds. Our garden is growing fairly well because of the hot weather and even though it hasn't rained a lot we are trying to  keep the vegetables watered - but that means the weeds as well. I have a theory about weeds that grow - well ...like weeds when your back is turned. I think they instinctively know when you are too busy, tired, working, throw in whatever excuse fits, to come out to the garden and weed and they take advantage and multiply like crazy, even more-so than normal. There is a saying that goes something like 'Life happens while you are making other plans' but I have to say that weeds happen when you are making other plans. I worked in the garden for just over two hours before I had to call it quits because of the heat. These plants have not had the suckers taken off the stems and that needs to be done as well - tomorrow is another day! I picked some zucchini today and we had it for supper tonight. There is great satisfaction in growing your own food and picking it fresh from the garden.
Posted by Ellen at 8:50 PM
Email ThisBlogThis!Share to TwitterShare to FacebookShare to Pinterest
Labels: Earthtones, garden

That is a big pile of strip set! I am inspired by your progress on UFOs. Glad you got some garden time in. Keeping all the balls in the air at the same time can be a real trick.

Cant wait to see your progress on this quilt as well as your garden. I love having a garden and watching it grow.

My garden is so terrible this year :(
I am fed up with it...not many weeds, but not many veggies either!