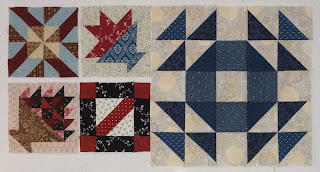 I am making great progress on the blocks for the Cheddarback Quilt although I doubt I will be caught up before the next set of blocks are released on the first of October. If I keep at it maybe I will be all caught up sometime in late October. :) 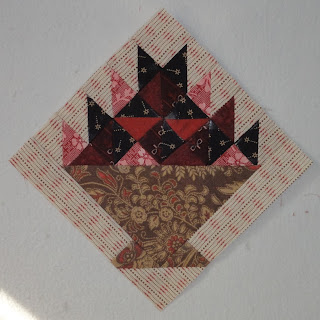 These blocks were all machine pieced and really went together quite well except for this little block. First off, I don't know if it was me or not but I needed to cut a couple extra triangles for hsts to make the block look like the picture that I used for the fabric placement. Second, Gay recommended foundation piecing and she provided the pattern but of course I didn't follow her recommendation - silly me. I decided to just do regular machine piecing and I cut the hsts to size and then I seemed to have a wee problem when I was done. That section was a bit too big. :(

Adjustments were made to some block pieces and voila I have a block that will finish at the correct size - perfect - except that I have lost the points on the base. I can live with it. :) It really is a little cutie!
I also wanted to point out that these two blocks are really quite similar but they were created using completely different construction methods. It was really cool to have a block come together in a manner that I wouldn't normally think about doing. I won't detail the construction differences here because even though these blocks are initially provided for free during the month they are released they don't stay that way.

Posted by Ellen at 10:26 AM
Email ThisBlogThis!Share to TwitterShare to FacebookShare to Pinterest
Labels: Cheddarback Quilt, fabric scraps, reproduction quilt