Another off the Frame

My sister arrived safely and we got this quilt set up on the frame and picked a panto and away we went...until trouble started that is!!!! 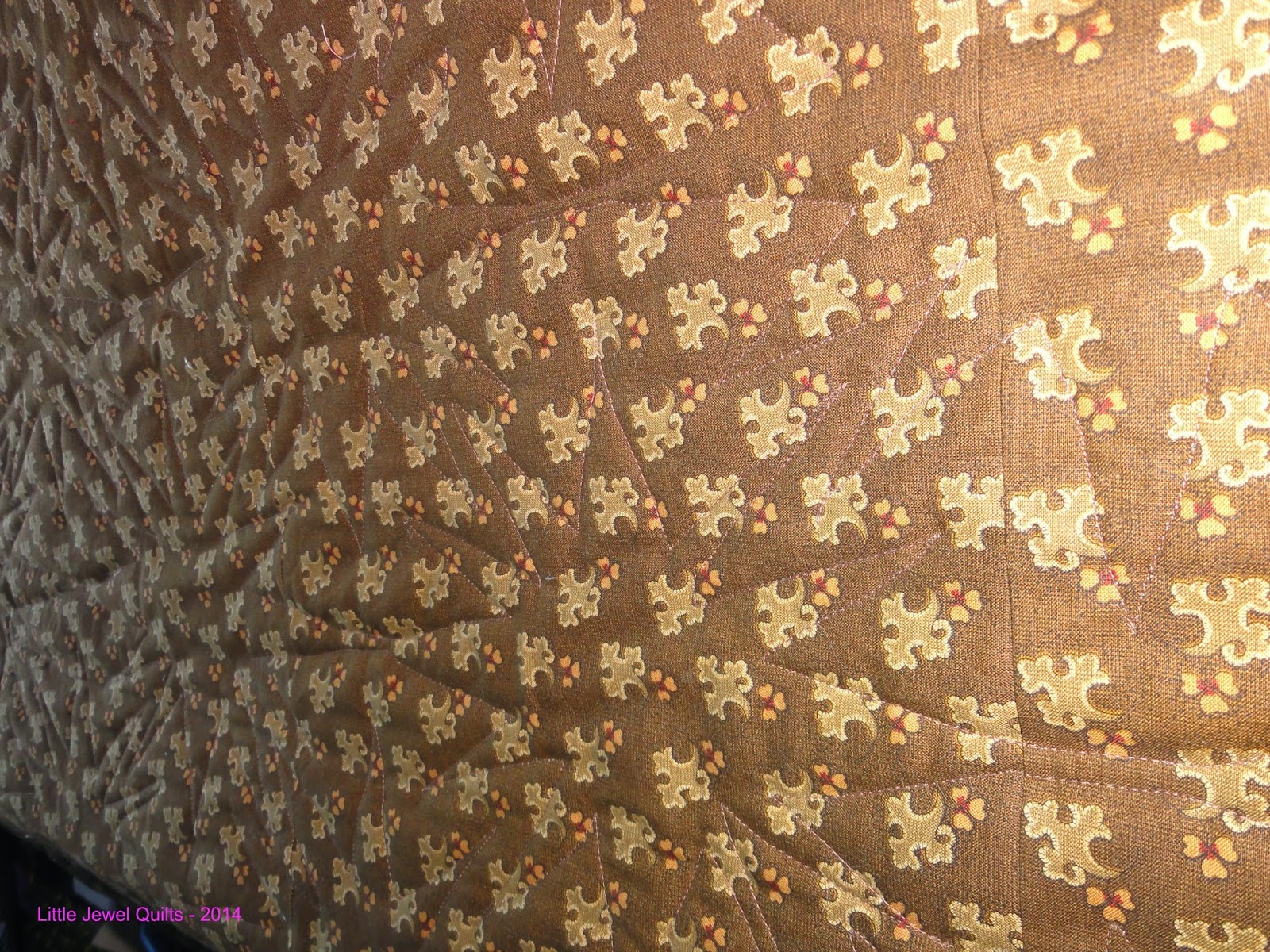 I honestly can't remember how long it took to quilt this baby. Maybe it should be that way - you know - like giving birth.

I think we had it loaded on the frame and ready to go at around noon or maybe a bit later and it didn't get finished until around 10 pm. Cheryl and I were delirious by the time we were finished and a wee bit cranky.

Things were going quite well and I was really happy with the way things were looking even though the panto I chose was a bit difficult for me. It is a star burst design and has many very straight lines ending with sharp points. Lets just say the points on my start bursts are dull and the lines are not so straight. I was going to have another quilt with a 'charming' quilt design and I really liked it.

The trouble started when my thread broke, and broke again, and again, and again and..... I tried everything I could think of that would stop the upper thread from breaking. I adjusted the tension multiple times, I changed the needle, I adjusted my quilting speed, I rethreaded the machine and I did these things multiple times but my thread kept breaking. All I could do was to keep going.

On top of the thread breaking issues, I realized that my batting was too short. How could that be?? I thought I measured carefully but it appears that I came up a few inches too short. As I was fixing the batting I realized that the end of the backing was coming up very close to the end of the top and I could only hope that I would not run out of backing before the quilt top was done. Thankfully, that worked out and I had just about an 1" of backing to spare. Talk about cutting it close!

Posted by Ellen at 7:32 AM
Email ThisBlogThis!Share to TwitterShare to FacebookShare to Pinterest
Labels: Nick's

I had that issue with a quilt and finally decided that it was bad thread. I'm not sure if that was really the trouble, but after trying everything else, throwing the spool away at least made me feel better. Glad you got it done though, like childbirth, we forget the pain and enjoy the product.

I too have had that problem.. I end up stopping, leave it for the next day then rethread, replace needle and off we go. Most times it works. I was also told to try a different size needle.

Oh my goodness... how frustrating is that?!?!
Amazing that you stuck with it, solved all the problems and finished it!

Some days with those machines are like that. They'll purr away and everything is fine. And the next day, they can cheerfully be throw through the window.... assuming we could lift them and that they'd fit. If I have a cone of thread that is continually breaking, I'll do all the things you did, plus what Jo said, go up a needle size. The other thing I try before chucking the cone of thread out the window, is drenching it with Sewer's Aid stuff. If that doesn't work, I declare it a bad cone of thread and it gets trashed.

You forgot to mention the other little problem we had - oh ya somehow we lost our quilting position and had to figure out what to do with that little issue too! Oh well many hours later this quilt turned out really beautiful. So glad I was there to help out with Amanda's and Nicky's quilts. Two more beauties almost ready for your completes. Love sis