I wasn't sure if I could do this block justice but I am soooo happy with the way it turned out. I gave myself plenty of time to work on it and I think that helped me a lot. If I had tried to rush through it I certainly would not have enjoyed the process as much.

The first thing I did was to paper-piece the background star. I can't believe I didn't take a picture of just the star - it was cute on it's own. The next step was to make the little 4 patches.

Before I started the applique process I made sure I had everything that I would need close by. I didn't want to have to stop in the middle of what I was doing and search out the needed item. That is just too annoying! The pattern from Sentimental Stitches provided a circle template to use for making the little circle pieces and the alignment markings were very helpful. I traced the circle onto heat resistant Mylar, cut it out and used the template to trace the circle onto the wrong-side of the 4 patches which I then trimmed into a circular shape making sure I left enough seam allowance. 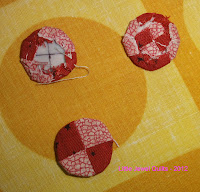 I had to figure out the best way for me to applique the circles onto the block and I thought that if I thread basted the outer edges of the circle and centered the template on the inside before I pulled it taut that it would help me to get a decent circle - these pieces are quite small (at least to me) and I didn't want to have to fiddle with them too much and have them shred. Once done, I sprayed my circles with regular starch (from a spray can) and pressed both sides. When it was dry I removed the basting threads and the template and I repeated the process for each circle. I positioned them on my block using a little bit of Roxanne's glue baste - I put a little dab in the center and a few dabs around the folded edge. I was careful to not get the glue where I would sewing. The glue worked great - it held
the circles in position while I sewed them onto the block. When I showed my husband the finished block he asked me what was supposed to go in the center. It's funny but I had the same thought - maybe a little bit of embroidery would look nice. I am going to leave it as it is for now because once all the blocks are made and the quilt is put together it just might not need anything in the center.

Posted by Ellen at 3:50 PM
Email ThisBlogThis!Share to TwitterShare to FacebookShare to Pinterest
Labels: Midget Blocks

That is such a cute block! And you did a fabulous job on it, too. Give yourself a great big pat on the back.

AMAZING! It looks great. I don't think it needs anything in the center at all. Itbs just SO adorable as it is. Doesn't doing these iny little blocks give you confidence that you can handle anything?

Very nice work! Look how straight you lined up the four-patch circles.

This block looks intimidating as all get out, but the results are spectacular!

WOW! You out did yourself with this one!

This one is very cute. Great job on getting it done this week.

Goodness! That block is only 5.5" unfinished!! Those little circles are just itsy bitsy! I am in awe. I don't think I'll ever be working on anything that tiny. Good for you!

What a beautiful little block! It looks fabulous and very difficult. Its all so perfect. Love sis

What a sweet little block! You did an awesome job. It's perfect!

I love your block! This is one that I have been looking at for some time and it is interesting to see your version and how you approached making it.